I was at Club Med Cherating and it was my first time on the wall in years. There were four routes before me – three with ropes already through the anchors. The part of my brain that remembers I used to be a rock climber mentally noted that these were easy routes – the kind that the 5C Master could climb with his eyes closed.

As I stood there before the wall, I felt alien without a chalk bag to dry my sweating palms. Looking down at my giant sneakers, I wondered how they would ever be able to fit onto those tiny ledges. If I couldn’t rely on my legs, how would my wasted arms be able to haul my body up with its additional ten kilos of mass?

The Club Med GOs had asked if it was my first time climbing. That I’d climbed before was about as much as I was willing to let on. I wasn’t about to admit that I was no beginner climber. In fact, I was more than happy for them to think I was a relative newbie who had only climbed a little here and there. I even let him tie my figure eight knot without saying a word.

I took on the easiest route first and let the GO shout up beta to me even though I didn’t need it. The route was easy enough and I was relieved to discover I could still climb even if I felt like a clown with my big shoes snagging all the way up the rock face. When I attempted the second route, I knew I’d given myself away because newbies don’t use side-pulls and my GO exclaimed, “Oh! You know how to climb!”

I pumped out at the top of the route where the footholds were too small for my big feet. Even as I wrapped my fingers around the holds at the top and my mind registered that they were jugs, I felt the impotence in my arms as my muscles refused to contract. As good as they were, I no longer had the power to use them. With the tight-rope belay, I was able to inch my way up until I could touch the anchor. The climber I once was would have been annoyed by the tight rope assist, but that day, I was just grateful for the help.

The third route was fun. There was a section with a crack and I have always been partial to that style of climbing. It was over all too soon but I don’t think my arms could have sustained much more. My belayer told the other GOs that I could climb and they promised to set up the fourth route on my last day. I wanted to try it but the boys begged me to build sandcastles on the beach with them and I didn’t have the heart to decline. 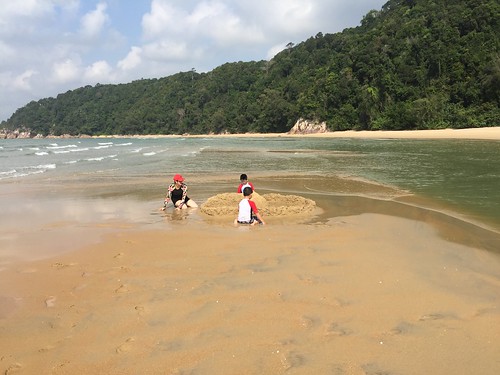 I look back now and think maybe I should have gone – even drenched in my swimmers and aqua shoes. Regrets – life is too full of them. I miss the joy of climbing outdoors. I think that it would be fun to do it again if I only had the gear and the people to climb with.

As the only member in our family that actually does stuff like this, no one else came to take photos for me so I had to borrow the one below from Trip Advisor. Now the only memories I have will be the ones in my head so I figured I ought to record them before they grow hazy with age. 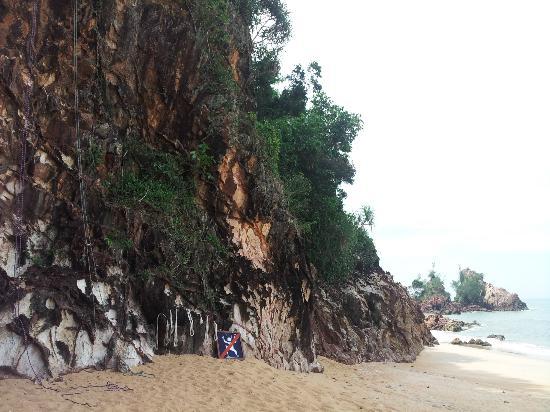 This photo of Club Med Cherating Beach is courtesy of TripAdvisor