About a year ago, the Jungle Babes made our first trip to Bukit Saga – Apek Hill. We had a guide back then because the trail was unfamiliar. It was a challenging hike with some serious inclines – especially from the access point all the way up to Bukit Saga. There was no easy warm up; it was straight to business from the moment we entered the jungle. 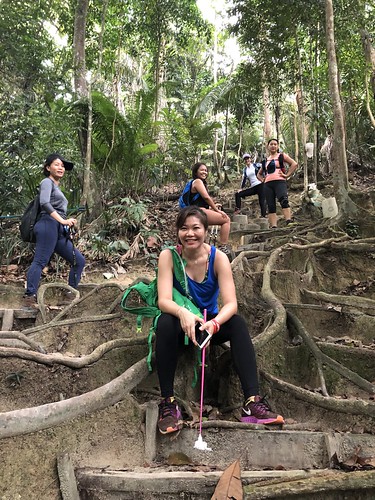 As part of our training for the North Face Outdoor Challenge, we decided that it was time for a return trip.

The problem with being labelled the “mountain lamb” is that after a while, you foolish think you own that title and that you can lead a group of hikers through the trail after only being through it once. Admittedly, there weren’t many forks in the trail so it did seem like a fairly straightforward trail to repeat on our own. 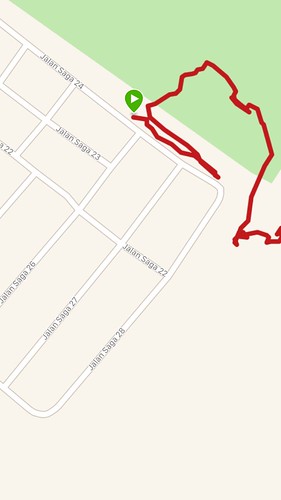 If you’ve done the entrance to Trail A before, you will see a familiar set of stairs marking the entry point. If you’ve never seen it before, it looks like this: 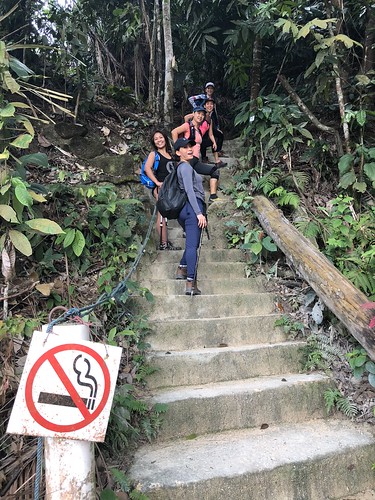 From there, it is a pretty straight forward trek all the way up to Saga Hill Top. 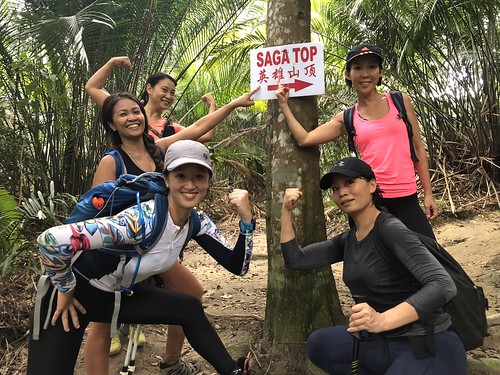 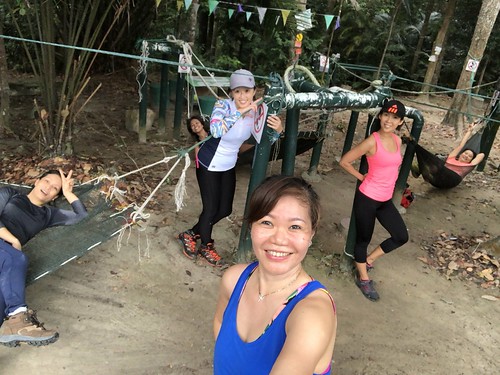 Where we got up to our usual nonsense… 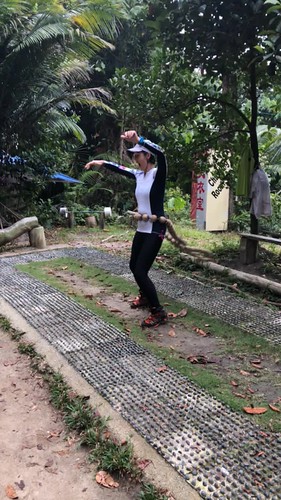 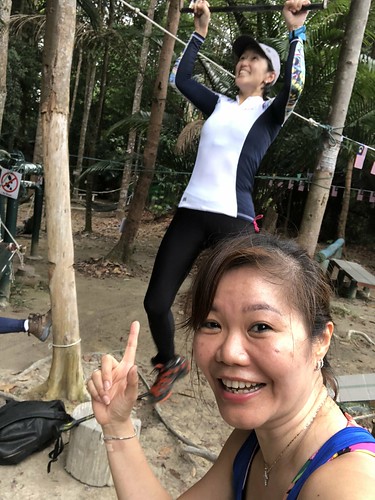 From Saga Hill Top, you take Trail C part of the way until you see a fork in the road with a sign pointing right for the waterfall. Take that fork. There aren’t many forks in the trail, but if in doubt, the most heavily travelled trail will be the path you need to follow. Bukit Saga-Apek Hill trail is pretty well marked for most of it.

The path leading to the waterfall is mostly downhill and pretty steep. It’s a bit of a “bully the vertically challenged” sort of steep because some of the steps can be deeper than the length of a leg – well, one bit anyway. 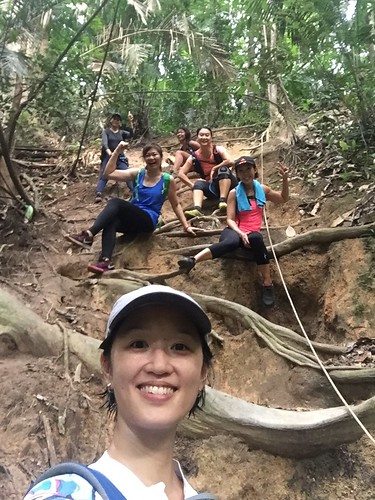 Unfortunately, the waterfall wasn’t as big as it was the last time we were there, but we still managed to get some fun shots. I had to sensor most of them – sorry! But this one’s okay: 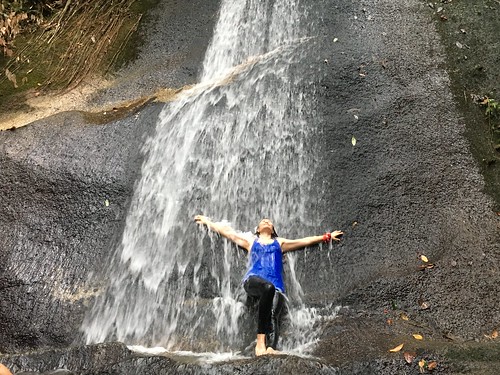 After frolicking in the waterfall for a half hour or so, it was time to get moving again with more inclines to negotiate.

After the waterfall, there is a T-junction where you can either turn left to descend or turn right to take the incline. I don’t know where the left turn takes you, but you will need to take the incline to get home. The last time we came, the trail was covered with thorny branches that we had to very carefully climb over. Thankfully, these had been cleared away.

When you reach Station 5, you need to take the trail exiting the right of the clearing. During our first trip, I was quite tired by the time we reached Station 5, so I must confess that I wasn’t entirely 100% confident that I had remembered correctly. Nevertheless, I ploughed on and hoped for something familiar. I was rewarded with a few familiar landmarks that confirmed we were on the right trail. The foliage at this point was quite distinctly different and I remembered the split in the path that joined back together, creating a little island of trees.

It was at Station 6 when I made my error. The correct trail should have been the one exiting to the right of the clearing. Unfortunately, it was raining heavily at this point and we took cover under the shelter for a brief period. My memory told me to take the trail to the right, but then I saw the lanterns leading off from the trail at 12 o’clock and I doubted myself. Maybe, I remembered wrong. Why would they mark the trail with lanterns unless it was the correct way. Technically, it was the correct way – out through the Cheras exit.

Subsequently, I made several more errors which should have sent my alarm bells ringing but didn’t. I blame fatigue.

The first thing I noticed was that there were no familiar landmarks. I should have recognised something, but it all looked unfamiliar. The second warning was the fact that we were descending far too rapidly – Bukit Saga was also a fairly high point so the trail should have been relatively level-ish. Then there was the Apek exit fork that our guide pointed out to us the first time we were there (and it was pretty clearly marked) – we didn’t see it.

When we arrived at a clearing I knew I had never seen before, I knew for certain that I had made a mistake. But having descended so far, we decided to press on, figuring that if we came out at Apek, we would just Grab back to our cars. Besides, the trail had been so wet and muddy, it was like hiking down a stream. We really didn’t relish the thought of hiking back up. 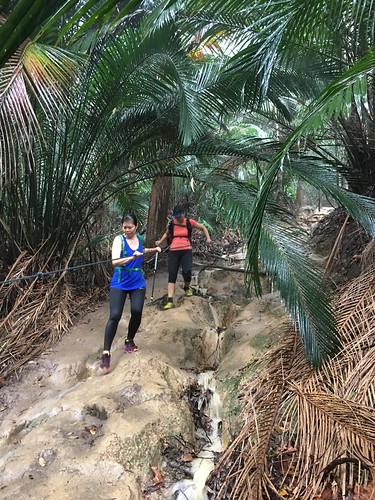 We finally exited onto a cleared path that looked like more construction was taking place. 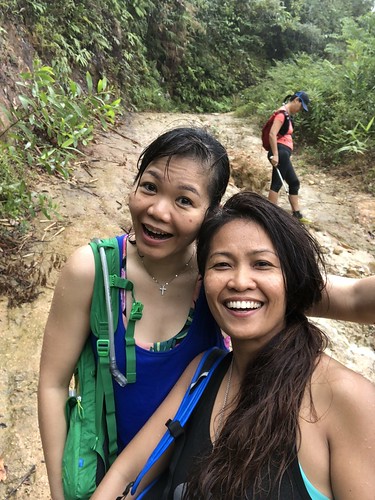 The earth was so muddy, it clumped onto the soles of our shoes making them so heavy we could hardly walk properly. 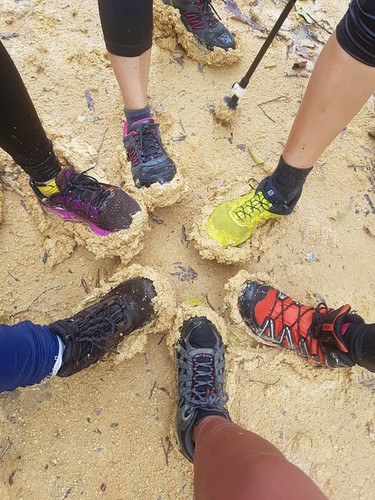 After a wrong turn, we finally relocated the exit trail and made it out to Cheras Hartamas – the opposite exit to the one we entered. 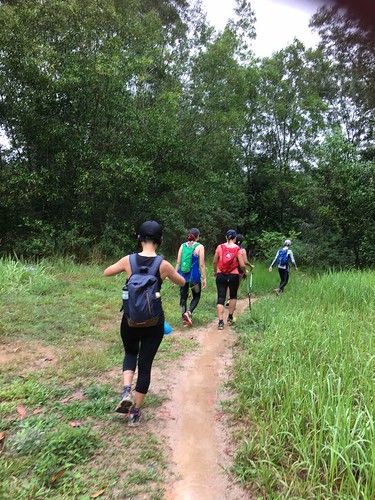 The gang was so relieved to be back to civilization, they forgot to be mad at me for making them late to their appointments. Either that or they just love me too much to be mad at me. I prefer to think it was the latter. 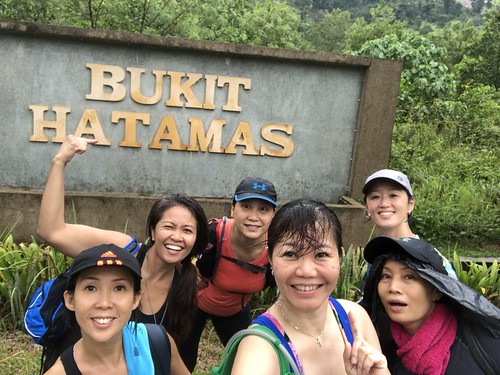 So here are the two hiking trails side by side, recorded by my garmin. We still covered the same distance, but we were a little slower the second time around. Not too sure how much of that time was due to how long we stayed at the waterfall and how much of it was because the muddy trail slowed us down. 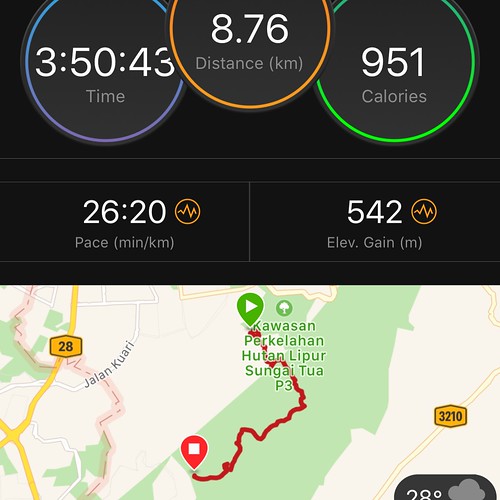 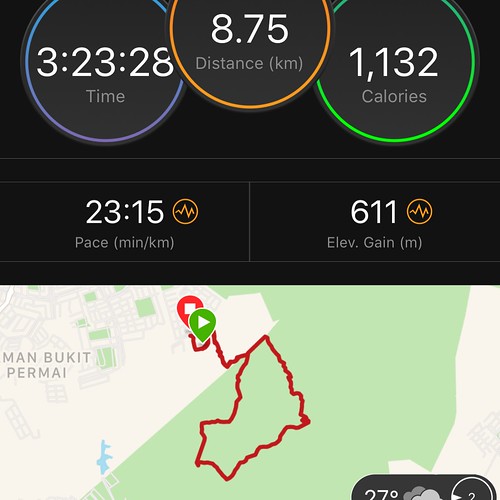 And that concludes the Jungle Babes’ epic adventure to Bukit Saga – Apek Hill.