After reading Spark, I decided it was high time that I took the boys’ physical training to the next level.

Our focus for G1 was to improve his overall fitness for health reasons because he’s been allergic to physical exertion since he was little.

For G2, I was inspired to build his physical fitness after reading about a study that saw an improvement in executive function after 12 weeks of jogging for 30 minutes, 2-3 times a week. I’ve often been concerned about his ability to focus and pay attention so this physical training program seemed like a winning idea.

We initially started jogging on the track, but I found it was difficult to keep G2 running consistently for 30 minutes. He often stopped to walk and occasionally, he would sit down beside the track to rest. Clocking 30 minutes of movement was near impossible without me having to play the drill sargeant.

One morning, the track was closed for a private event, so I took the boys to the gym. They relished the air conditioning so much that they begged to run in the gym instead. Migrating to the treadmill at the gym had its advantages so I agreed. It meant that I could control their running pace and G2 finally recorded 30 minutes of continuous movement. Okay, so he wasn’t running the entire time, but at least he was moving.

The best idea came when a friend suggested we use the cross-trainer. I suggested it to the boys and they liked it. In fact, they liked it so much that they covered more distance than they usually did on the treadmill – at least a kilometer more for both boys! Yes, we were relying on the readings from the machine which could be slightly inaccurate, but I’ll take it.

G1 and G2 fancied themselves as heroes in their Mech-Warriors, defeating monsters. They took the reading from the distance covered as the number of monsters they defeated in the session. So 2.98km meant that 298 monsters were defeated. It also meant that they could compete against each other to see who defeated more monsters.

30 minutes of cardio training in the gym has never gone by so quickly. Even I must confess that this is more enjoyable than working out on my own. Best of all, the cross trainer doubles up as cardio training and resistance training! Based on the training recommendations from Spark, that’s the exactly what the doctor ordered. 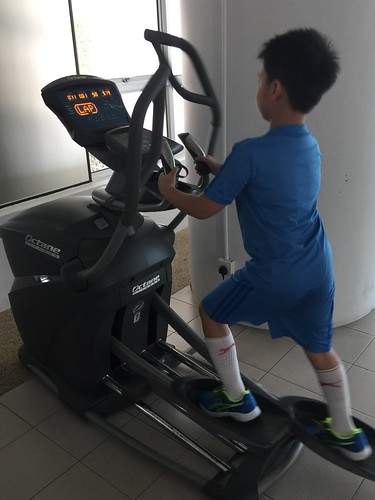