After nailing the Big Thrill at Skytrex Shah Alam, the Jungle Babes decided it was time to up the ante and take on the Extreme Challenge…

These were the obstacles on the extreme challenge that we had to face (some were repeated so it worked out to be about 26 obstacles in total):

We’ve faced some of these obstacles before on the Big Thrill, like the flying fox, and the fisherman net, so let’s talk about the new obstacles…

The first ladder up is challenging only in the sense that it is a long way up. That means it can get pretty tiring. It also means that it wobbles a lot more than the other ladders we climbed before. 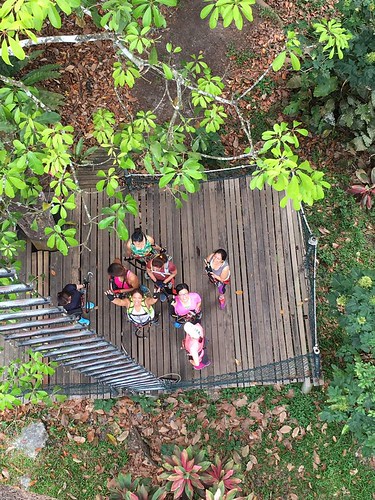 It leads us to the first flying fox which is scary because it is the most exposed flying fox we’ve ever had to do. You can’t see the other end because it’s hidden in the trees. Aside from the wire suspended before you, there is absolutely nothing between you and the ground. It’s like jumping off a cliff. 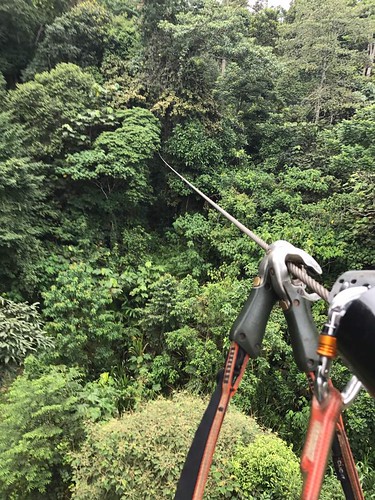 Here’s a shot from the ground up. 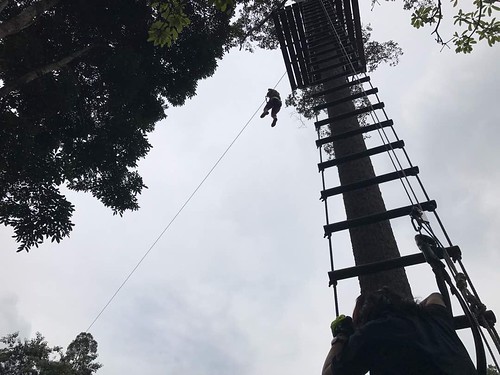 Neither of these pictures do justice to what it really feels like to be standing up on that platform and placing your trust in that single cable before you.

If you missed our previous post on the Big Thrill, this is what the Fisherman’s Net challenge looks like: 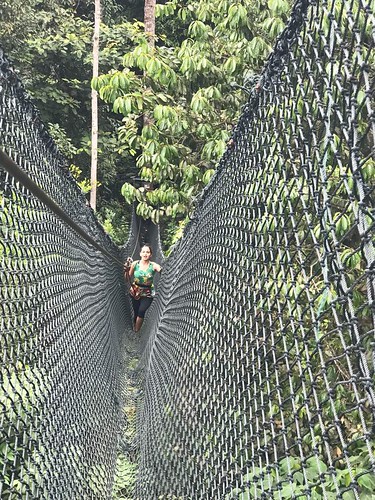 Nothing to it – just a bit of balance involved because of the wobble, but you won’t have to worry about falling off because the net holds you in.

Like it says – it’s a cable and you have to make your way across it. You could try to tightrope-walk it if you want the extra challenge. 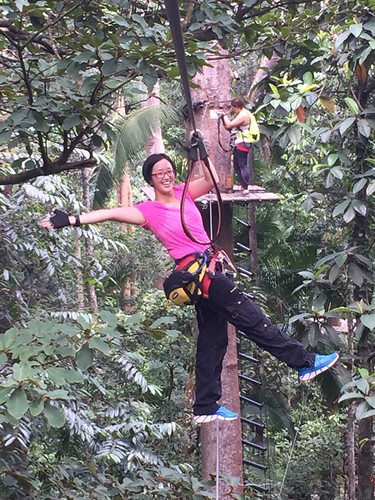 In addition to climbing up ladders, you now have to climb down them as well. It’s easier than climbing up, unless you’re afraid of heights, in which case – don’t look down. 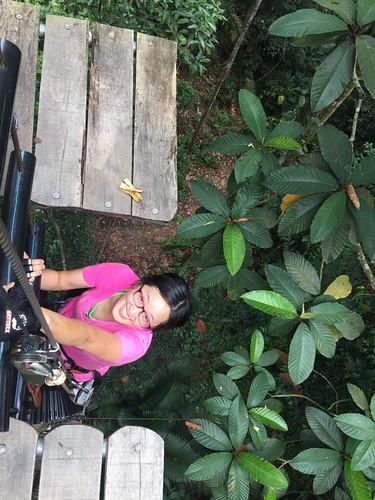 If you visit Skytrex Extreme Challenge today, you’ll find that the monkey bars have been removed. They were replaced with a cable walk because the bars were getting too worn. It is a pity they didn’t set up a new set of monkey bars because I thought it was quite an interesting challenge. 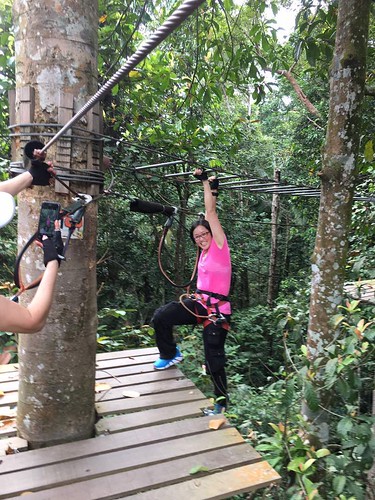 Aside from the monkey bars – which really required more upper body strength than anything else – this was probably the most challenging obstacle of all. The ropes swing and you have to reach out for the next rope with your foot. 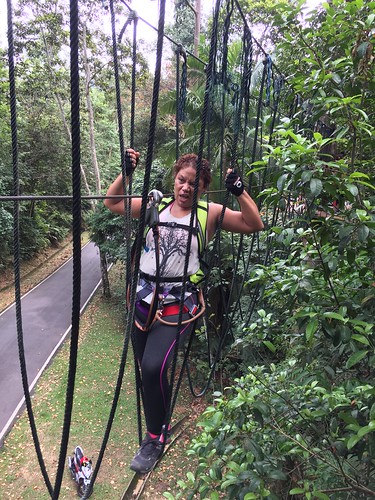 If you have anything bulky hanging from your sides, it will get snagged on the ropes. I learned that the hard way when my the stuff in the pockets of my cargo pants kept catching on the rope. I know, I didn’t really explain that very well, but you will get what I mean when you try it.

This is just a glamorous cable walk with pipes hanging in your way. 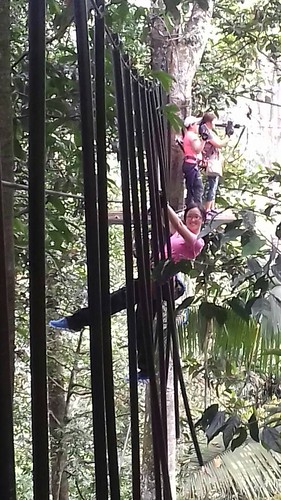 Another fairly straightforward obstacle – get across to the other side by navigating the zig zag planks and cables. 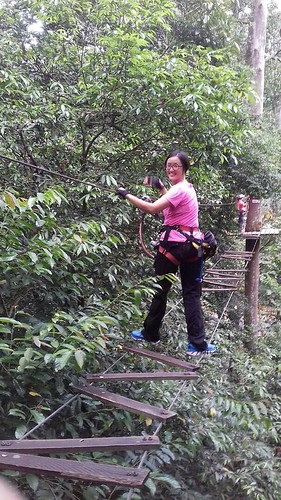 This was an easy challenge – so easy that a few of the Babes decided to increase the challenge by wobbling the bridge. 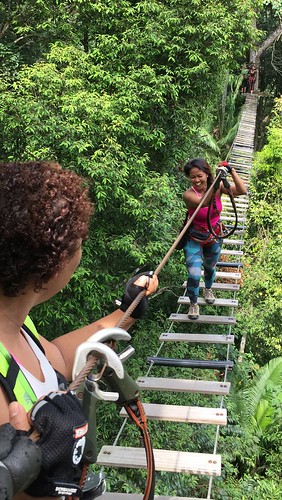 And that was it. Really. Quite simple when you look back on it. 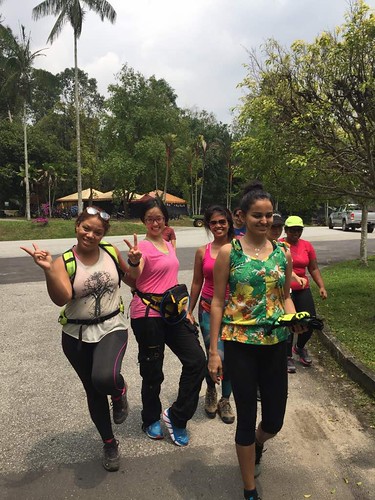 Feeling happy and accomplished on the way back: 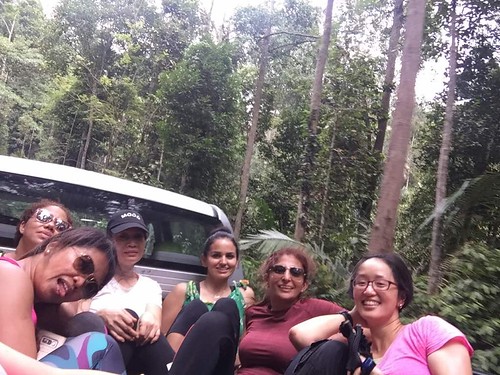 Until the next challenge: Skytrex Melaka!