Getting up at an ungodly hour on the weekend to go biking with your partner even though you would much rather negotiate with the sandman for a dream instead.

The hubs finally convinced me to go biking one Sunday morning when the roads in the city were closed for KL Car Free Morning.

My very brief riding career ended after the Malakoff Duathlon back in 2006 – I haven’t been back on a bike since. It seems like every time I go biking, I always return home unable to sit down without a significant level of discomfort. Having learned to ride a bike on a BMX, I don’t think I ever really got used to the idea of being so high off the ground. I normally like to ride with the seat in the lowest position possible so I can put my feet on the ground while still on the saddle but the correct seat height should be when your leg is almost in full extension when the pedal is at its lowest point – that usually means that you have to get off the saddle when you want to stop.

So you can bet that I wasn’t feeling very confident when I went biking with the hubs. It figures because I stacked it in the car park before I even got onto my bike – another reason not to go biking ever again. 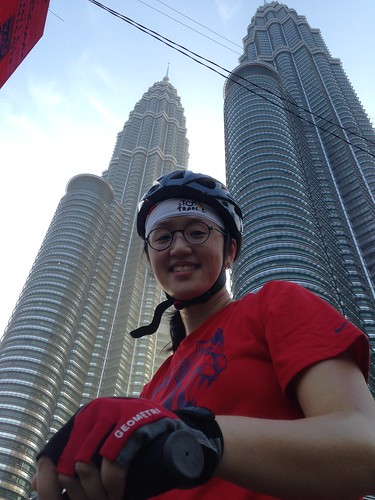 But… I did managed to clock in something like 9.5km and I wasn’t in too much pain the next day so maybe we’ll go again? Or maybe I’ll just stick to the scooter and the waterrower?

Although… there are some really great benefits for biking that are hard to resist:

Hmmm… maybe I’ll try it again. Maybe. If only to get a little more tone in these legs and to curb this expanding waistline…